How to Sew Organza Ruffles Organza is used to make delicate garments, wedding accessories like veils and capes, as well as décors such as curtains and draperies. This is because the plain weave material is not only transparent but also comfortable.

Apart from delicate garments and decors, Organza is a quick go-to option for creating beautiful formal wear owing to its delicate, lustrous qualities, as well as its shiny texture.

The fabric itself is usually expensive; however, the ribbon is quite affordable. Many people use organza ribbons in crafting projects because of its versatility and durability.

One of the more popular uses is sewing organza ruffles. You have to put in some effort before becoming adept at creating items with organza. This is due to the tendency of the material to pucker and shift easily while in the machine.

Here’s a step-by-step guide on how to sew organza ruffles.

Choosing the width will vary depending on how deep you want your ruffle to be and the needed hem/seam allowances. If you want a small fine ruffle 1” wide, cut your organza strip 1” wide plus your seam/hem allowance from one edge to another.

Your organza length determines how full your ruffles will appear.

Moderate fullness = 1.5 times the length of the finished ruffle you want

The best way to quickly get the hang of allocating the right amount of strip is to sew spare fabric pieces multiple times before moving to your organza.

Cleaning a ruffle’s edge can be done in different ways, but you should select the finish based on how you want the ruffles to come out.

Your finish should look delicate to maintain the soft ruffle effect. The quickest, most commonly used method is the double folded machine stitched hem. The seam allowance allocated for the lengthwise edge of the organza ruffle is ½”.

Flip the material to the other side once at 1/4″ (that’s dividing the allowance by 2), then turn the folded edge again at 1/4″ to enclose the organza’s raw edge.

After you make a fold, iron the fabric, and use some pins to hold the fold in place.

To get a perfect organza ruffle, always finish the ruffle’s hem first because it can be quite tricky to complete once you gather.

Switch to a basting stitch then place the organza ribbon into the machine with the needle positioned at the end of the fabric long edge. Apply a long straight stitch along the fold, using the line on the fold in Step 2 as a guide.

Leave a reasonable amount of thread at both ends to make pulling the gathering stitch much easier. It helps when you pull the bobbin threads together at the same time as this allows the organza to gather more evenly. Do not rush while sewing the fabric to avoid puckering.

The fabric gathers more evenly as you pull the bobbin threads together at once. Also, ensure that you sew carefully and slowly to avoid puckering.

5. Use a Pin to Attach the Ruffle to the Seam

Align the ruffle’s basted edge with the corresponding raw seam edge and use a pin to hold it down.

Wrap the loose threads in a cross-motion around the pin to keep the basting stitches from coming undone when you finally pull them to gather the ruffle at the other side.

6. Gather by pulling the basting threads together

On the opposite end of the pinned organza ruffle, pull the two top basting threads gently from one ribbon end to gather the organza ribbon then pull carefully along the pinned edge. Slowly build upon the gathering and adjust the gathers down the fabric length. This makes the gathers smooth and evenly spaced along the full extent of the ribbon after you have pulled the gathering thread.

Once the gathering has been evenly distributed along the edge, pin the organza ruffle’s gathered seam perpendicularly to the edge. Prevent the gathering from coming loose on the second edge by crossing the loose threads around the pin as you did for the first edge in Step 5.

You can either use a serging stitch or a zig-zag stitch to clean finish the organza ruffles’ edge. The zigzag stitch method is commonly used by most sewing beginners who don’t own a serger.

To use the zigzag stitch mode, switch the straight pressure foot to zig-zag, change the tension balance on your machine, and sew at a denser setting for a quality finish.

When ironing the organza ruffle seam, make sure the iron isn’t too hot. Iron the ruffle seam with the seam allowance facing away from your gathers. And while it is good to iron the gathered seam allowance before applying a clean-finishing technique, do not place your iron on the actual gathers.

If you have any difficulties following this guide, talk to us in the comments section. You’ll get all the answers you need in no time. 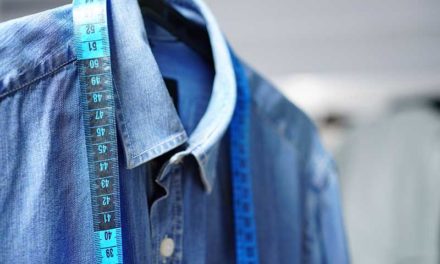 How To Sew A Collar HOW TO SEW A FACE MASK How to Sew Neck Binding